Sometimes dreams come true easily, sometimes you just need a little help. The Black Yeti is therefore proud to help young talent to achieve their best goals. This is the aim of the World Rookie Tour and was the spirit of the 2019 edition of the World Rookie Snowboard Finals.

From the 25th to the 30th of March Kitzsteinhorn Zell am See – Kaprun welcomed the best U18 snowboarders of the world and the winners of the previous WRT stops in Europe, South and North America, Oceania and Asia, who arrived in Austria full of enthusiasm and ready to conquer the podiums and the titles of World Rookie Champions.

The halfpipe qualifications and finals took place on Saturday and Joonsik Lee and Ruki Tomita became the Halfpipe World Rookie Champions. Here you can find report, results, video and pictures.

On Sunday the Kitzsteinhorn Snowpark was the perfect playground for the long-awaited slopestyle finals and offered riders an amazing course (watch the video preview here).

The girls started first and Annika Morgan (GER) took the first place in the rookie category showing her style with cab 540 tailgrab, backside 720 mute, backside nosbutter 360, fs lipslide prezel out, swicth backside blunt 270 out, sw bs to normal, bs boardslide. “I am really hyped to win the Nines wildcard that has always been my dream! So stoked!”. Annika was followed by Mona Danuser (SUI) and Addison Gardner (USA).

Mitchell Davern (NZL) dominated the rookie boys category and won the World Rookie Boy Champion title. His riding level was very high and his tricks very technical. Mitchell’s run consisted of a cab double cork 1080 indy, switch backside 1260 mute, backside 360 tuckknee, underflip 540, 50-50 bs 360 out, bs up the rail, fs, ds 270 in backside boardslide. Yuuto Yamada (JPN) and William Mathisen (SWE) won respectively the second and the third place. Michtell impression: “I did not come with any expectations, just wanted to put down my run and I am super happy.. so stocked”.

Another edition of the World Rookie Snowboard Finals came to an end. Rookies and groms had really fun not only during the competition but also in many lifestyle activities such as during the capoeira lesson, where they discovered the Afro-Brazilian martial art that combines elements of dance, music and acrobatics, during the glass blower workshop where they learned how to make glass, and the workshop with Viva con Agua, charity based organisation campaigning for clean drinking water worldwide.

Congratulations to all the winners and see you next year! Thank you to all the sponsors who provided beautiful prizes for the winners: SurfToLive, Level Gloves, Nitro Snowboards, Union Bindings, TSG and Boardriding. Here the pictures from the last day.

Watch here the video highlights of the slopestyle winners. Enjoy!

Check out the results lists here below:

The halfpipe finals took place in a beautiful and warm sunny day and riders could finally enjoy the massive and well-shaped Kitzsteinhorn halfpipe at its best. Judges and spectators were once again surprised by level of riding and creativity.

The competition began early in the morning with heat one made of rookie and grom girls. Ruki Tomita from Japan won the prestigious title of Halfpipe World Rookie Girl Champion thanks to her run composed by technical and creative tricks: frontside air indy, backside 540 mute, frontside 720 indy, cab 720 indy, backside 540 mute. Ruki was followed by Leilani Ettel (GER) and Berenice Wicki (SUI).

“First time here and take my best to show. Then Win!!” said Ruki, showing her happiness. Ruki also gained the prestigious Golden Ticket for next season World Rookie Tour stops, a spot for next season FIS World Cups and many other goodies from Nitro, Level, Boardriding, TSF and Union.

Regarding the rookie boys category, also this year the level of the competition was vey high and judges could already see the future stars of snowboarding. At the end of the day the Black Yeti crowned the new Halfpipe Rookie Boy Champion: Joonsik Lee. The japanese impressed the public with his unique style and showed everybody a huge frontisde 1260 tailgrab, crippler 540, frontside 1080 melon, cab double 1080 indy. The podium was completed by Raio Kuchisubo (JPN) and Elias Gian Allenspach. Raio will join a Rookie Shooting in Les 2 Alpes together with Leilani Ettel (GER).

“Hi, I am Joonsik from South Korea, I got first place and got invite from New Zealand World Rookie Tour. I am really happy to come here and win. Thank you World Rookie Tour“, said Joonsik, who is arleady dreaming about his next trip to Chile organized by the World Rookie Tour. Joonsik will also take part in next season FIS World Cup together with Ruki Tomita.

This amazing day concluded with the workshop Viva con Agua, a charity based organisation campaigning for clean drinking water worldwide.

Good job riders and congratulations to all the winners!! Thank you to all the sponsors who provided beautiful prizes for the winners: SurfToLive, Level Gloves, Nitro Snowboards, Union Bindings, TSG and Boardriding.

Check out today results here below:

Watch here the highlights of the halfpipe winners. Enjoy! 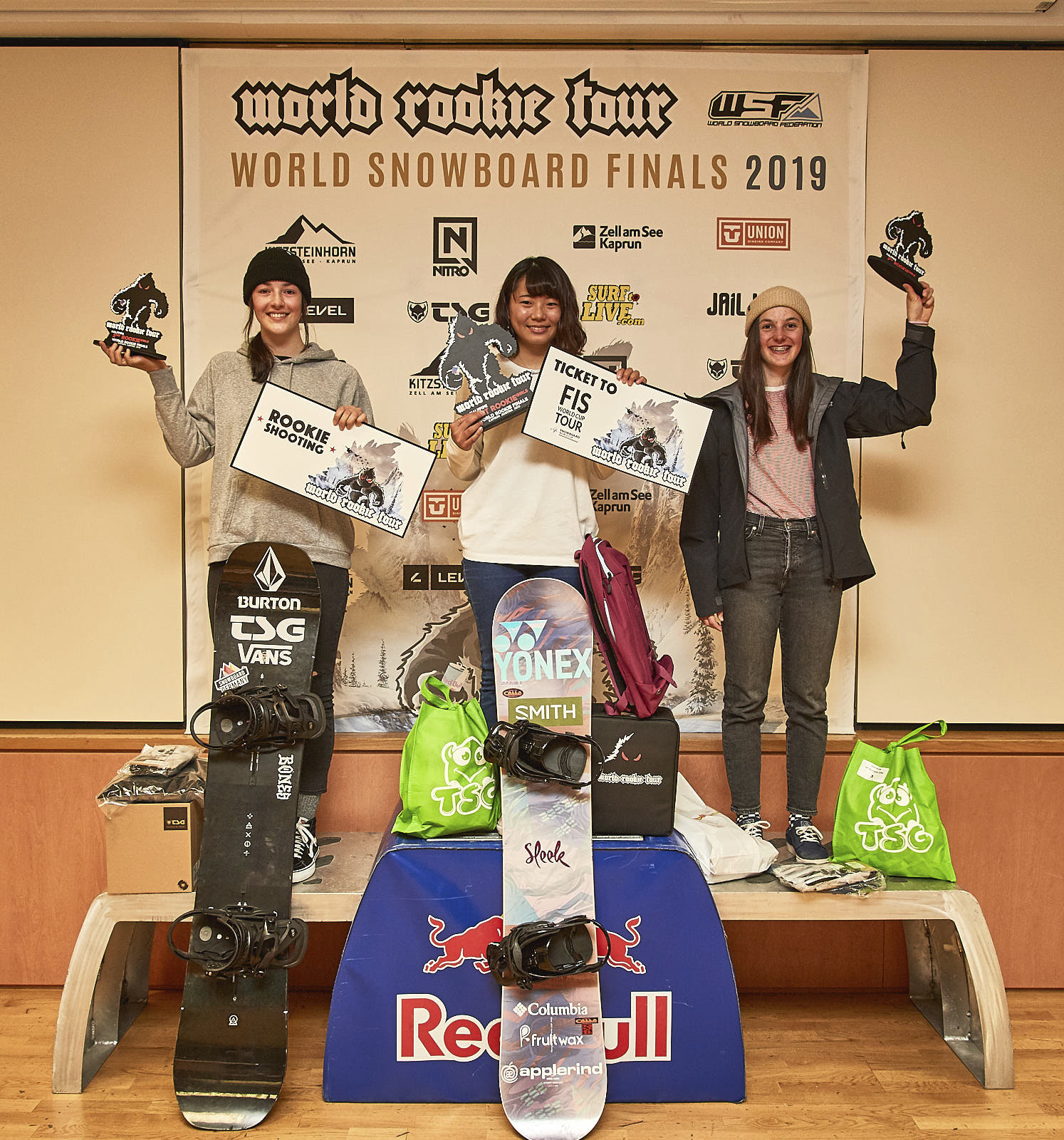 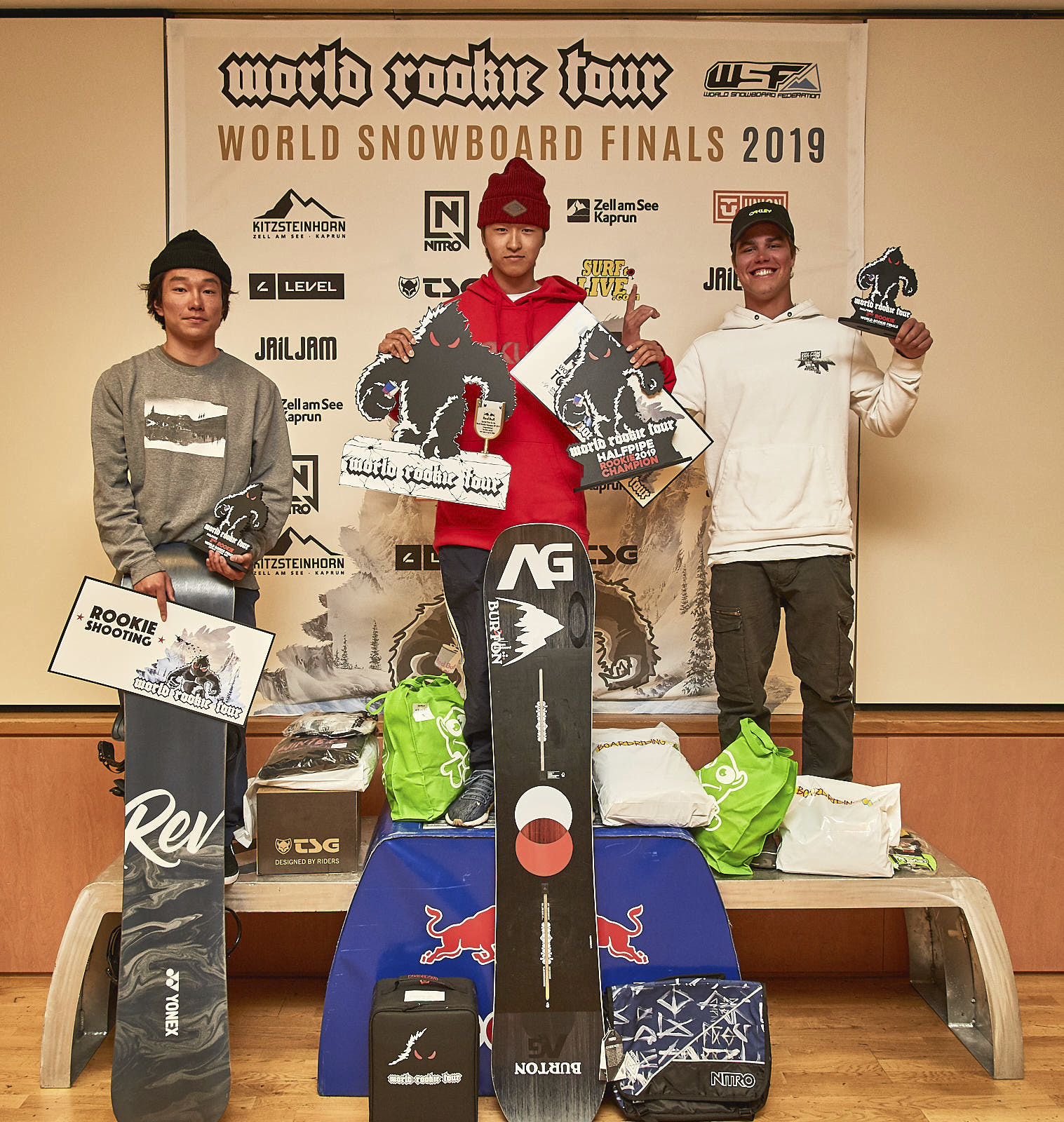 Click here to see all the full Grom girls results

Click here to see all the full Rookie girls results

Click here to see all the full Rookie boys results

After the qualifications, Game of Skate with Boardriding.com had the chance to earn great prisez to all the best skaters of the World Rookie Tour.

See you tomorrow with the Halfpipe quali and finals! Here the program: 29th March 2019 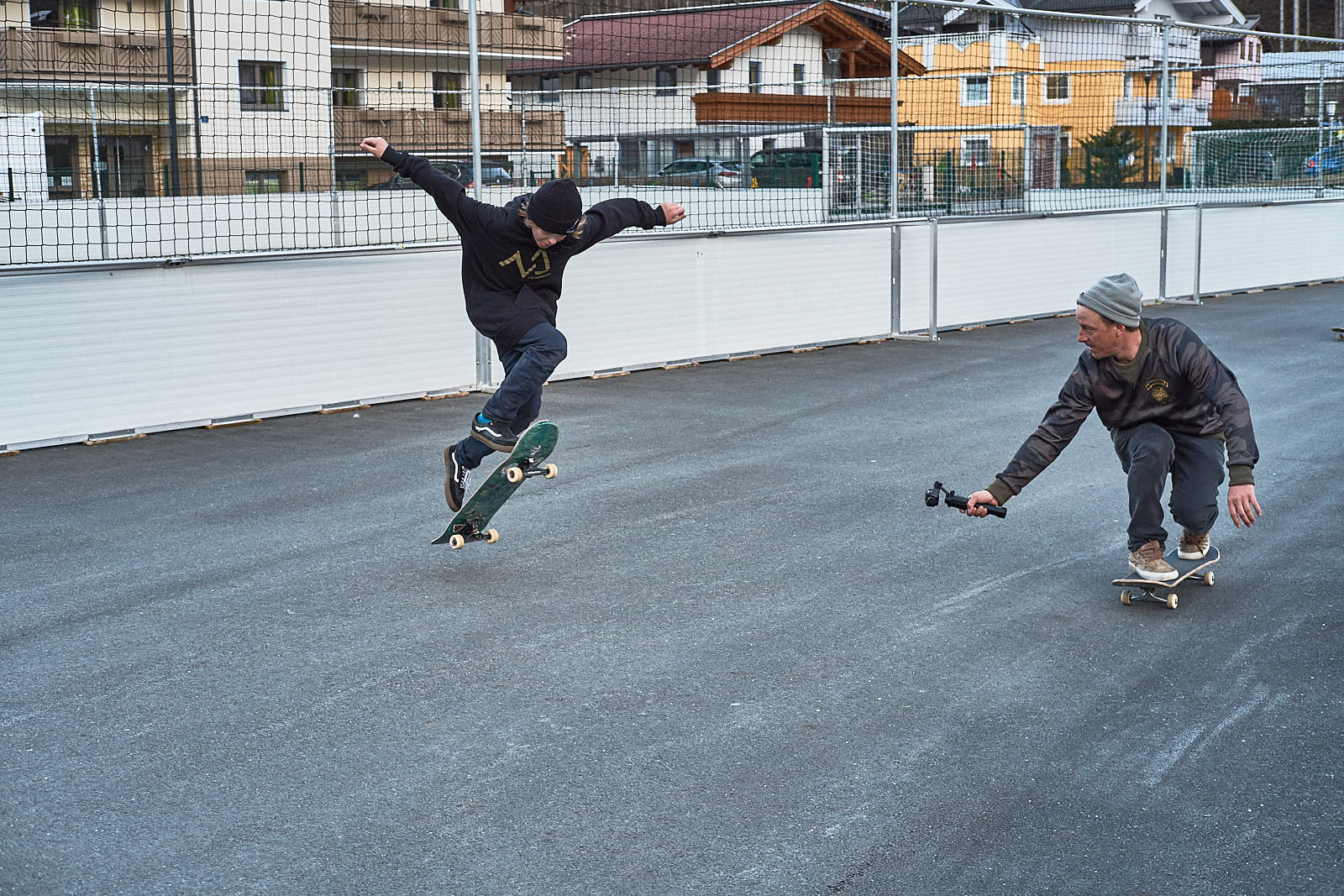 After travelling all around the world and discovering the future pro riders in Chile, New Zealand, USA, Japan, Switzerland and Italy, the Black Yeti cannot wait to see and crown the next World Rookie Champions in Kitzsteinhorn Zell am See – Kaprun.

From the 25th to the 30th of March 120 riders from 20 nations will gather in Austria and compete in the legendary and the most awaited WRT event, the World Rookie Finals, which will be held for the third year in a row in Snowpark Kitzsteinhorn.

Also this year the best rookies and groms will receive incredible prizes such as wildcards to World Class Events like the Audi Nines, a spectacular event that each year gathers the best athletes of the world, filming sessions with Pirate Movie Production, invitations to World Rookie Tour Shooting Trip to Chile and many tickets to next season World Rookie Tour events. 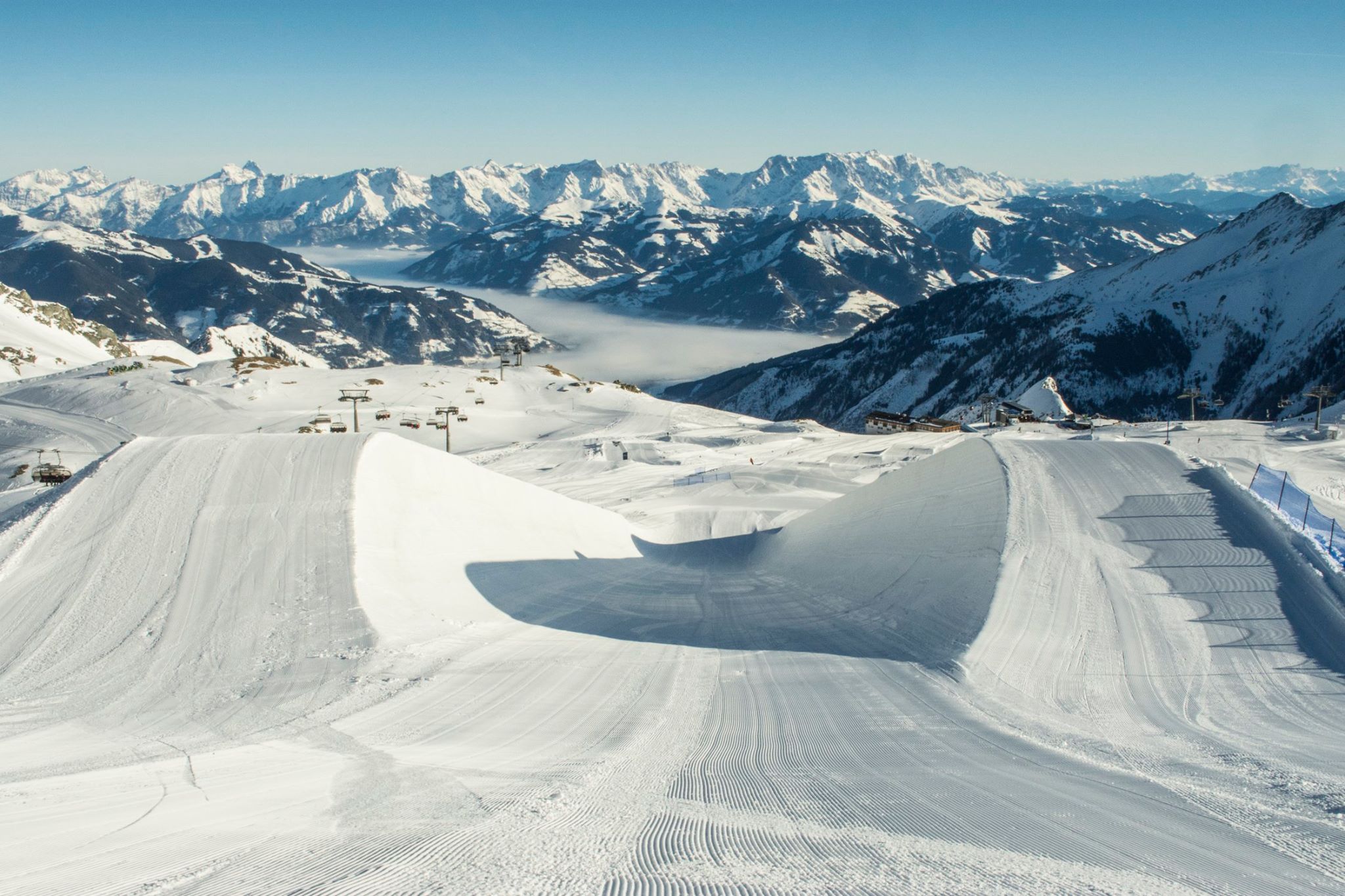 Moreover, the male and female Slopestyle and Halfpipe Champions will get a spot in the amazing the Audi Nines, a spectacular event that each year gathers the best athletes of the world, and in the 2019/20 FIS World Cup Tour.

Today is the arrival day and after having registered riders have the opportunity to see the amazing park and the huge pipe and to have dinner all together in the evening. 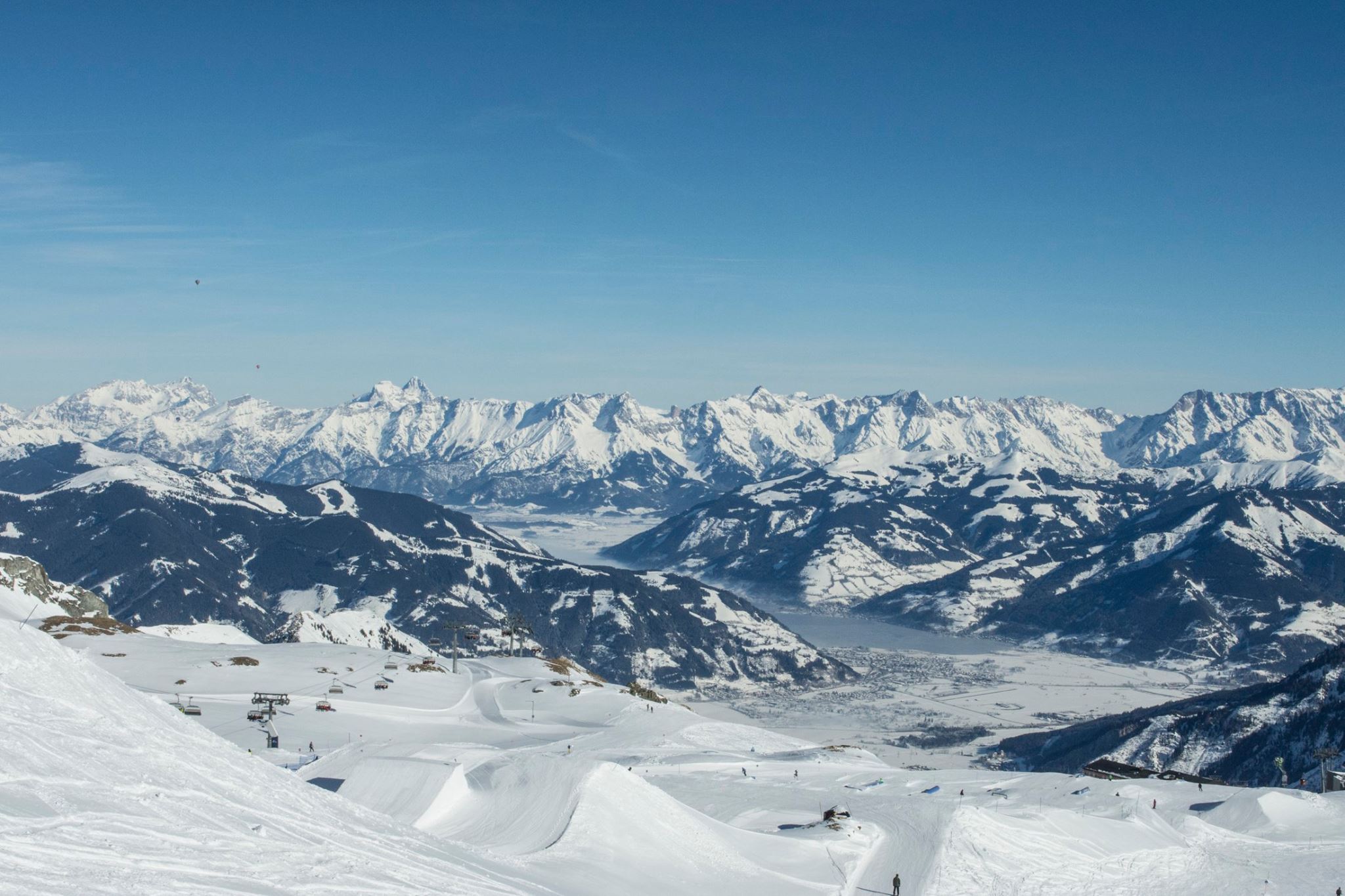 In the next days will take place the slopestyle and halfpipe competition and many interesting activities such as workshops with Viva con Agua, Yoga lessons, a first aid clinic, the final party and much more.

Last but not least, thanks to the great partnership with boardriding.com you will be able to watch the live streams of the World Rookie Finals. Stay tuned to get le link! In the meanwhile, save the link for the live scoring microsite which provides real-time standings, start lists and results: http://live.rawmotion.com.

Click here to find all the info about updated program. 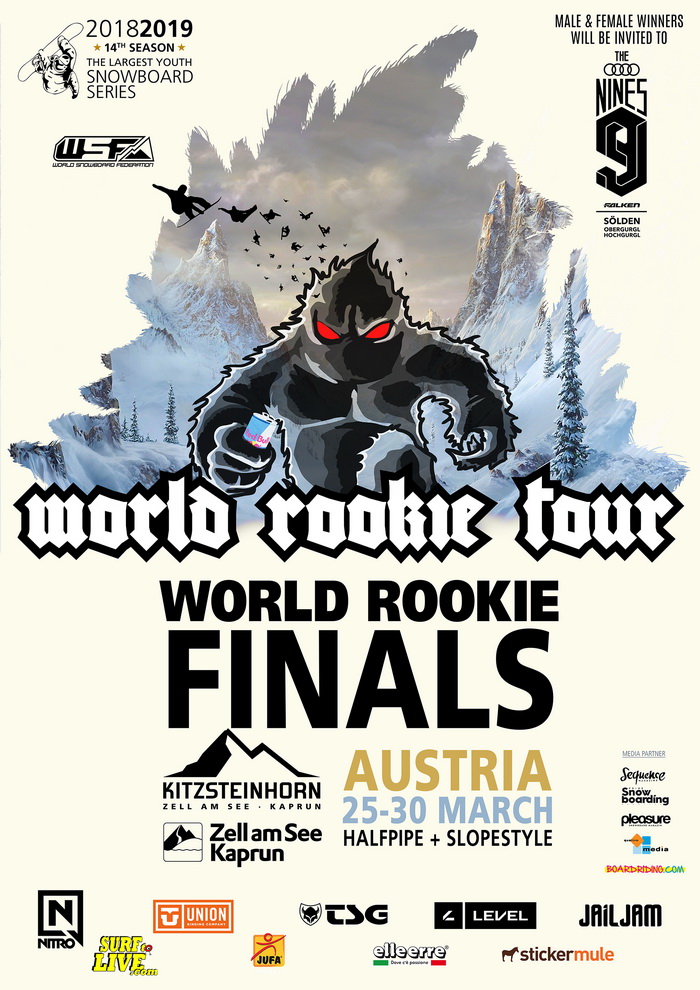 After travelling all around the world in Europe, from South America to New Zealand to and from North America to Japan and seeing the most prominent riders battling to conquer a spot in the World Rookie Snowboard Finals in Kitzsteinhorn – Kaprun/Zell am See, Austria, the Black Yeti is looking forward to seeing the next World Rookie Tour Champions.

Only the best young guns from the previous World Rookie Tour stops will join this legendary event. As is tradition the winners of the World Rookie Finals will be awarded with incredible prizes: wildcards to World Class Events, filming sessions with Pirate Movie Production, invitations to World Rookie Tour Shooting to be held in Les 2 Alpes France from 10 to 13 of July, Trip to Chile and many tickets to next season World Rookie Tour events. Moreover, this year the Black Yeti joined the forces with one of the most famous international competition, the Audi Nines, and the male and female Champions of the 2019 World Rookie Tour Snowboard Finals will win a ticket to this unique event that will take place from the 22nd to the 27th of April in Sölden and in Obergurgl, Austria.

Last but not least, the World Rookie Tour has established an end of season important partnership which will increase significantly the 2019 World Rookie Finals prizes:  all the 2019 rookie champions, snowboard freeski, male and female, will be awarded with a personal spot for the 2019.20 FIS World Cups.

Takeru Otsuka and Kokomo Murase were the previous WRT winners and started their carrier at the last year finals. Who will be the next snowboard stars?

From the 25th to the 30th of March riders from all over the world will gather in Austria for a unique sports and lifestyle event in a great international scenario.  The program of 2019 World Rookie Finals will include World Snowboard Tour Slopestyle and Half Pipe contest and many lifestyle activities: social dinners, workshops with Viva con Agua, Yoga lessons, a first aid clinic the final party and much more.

Click here to find all the info about program and booking. Download the registration form here, fill it out and sent it to registration@worldrookietour.com.