N.B.: schedule is in CET time

The Black Yeti crew spent a full week in Hintertux where the first ever combined Snowboard and Freeski World Rookie Finals went down successfully. 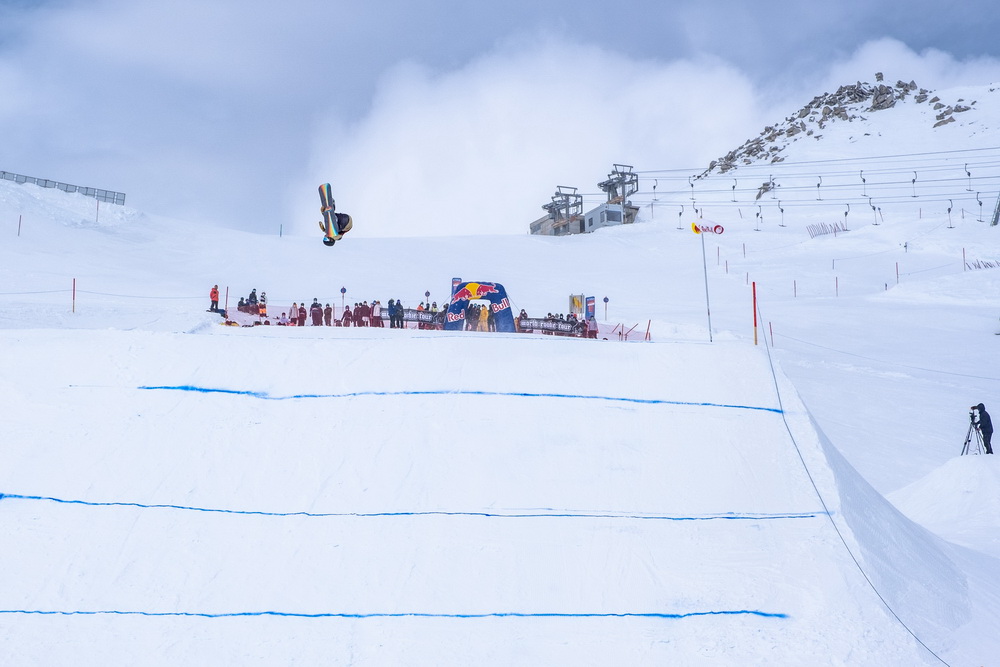 From April the 29th until May the 2nd, after the end of the freeski event, almost 80 snowboarders from 16 different nations came to Hintertux, for the most awaited youth snowboard event of the season: slopestyle competition, art workshop, music contents and avalanche camp were some of the magic ingredients of this unique event.

In fact, in the heritage of the WRT events, the 2021 Snowboard Final was not only an international slopestyle competition, but as well it offered to all participants several side activities thanks to a strict Covid Concept which ensured the safety of all. 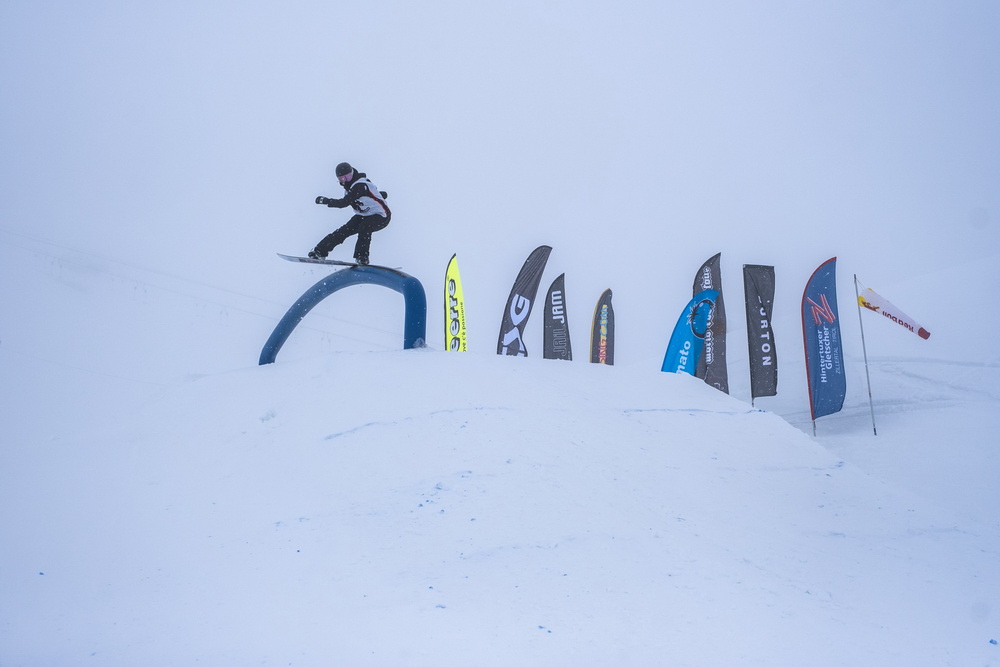 The 2021 World Rookie Snowboard Final competition went down in Hintertux Glacier, at the Betterpark Snowpark, in very difficult weather conditions, with permanent clouds and some wind, which obliged the Local Organizing Crew to adapt the program day by day. Finally, all the riders were able to showcase their skills with a regular slopestyle contest fort he male rookie category and a rail jam for all the others.

Male Rookies challenged for the 2021 World Rookie Tour Champion title on a slopestyle course consisted by three tables with different kickers and one table with three jib obstacles at the end. Judges scored each rider using overall impression.  Hiroto Ogiwata (JPN) conquer the victory and the World Rookie Champion Title with a Cab Double 900 mute, bs double 1080 mellon, fs 720 toe edge and front plant 450 out on the last rail. Hiroto was awarded, among the many prizes, with a ticket to 2021.22 FIS World Cup. Liam Johnson and Lucas Ferry, both from the USA, got second and third and  completed the male rookie podium. 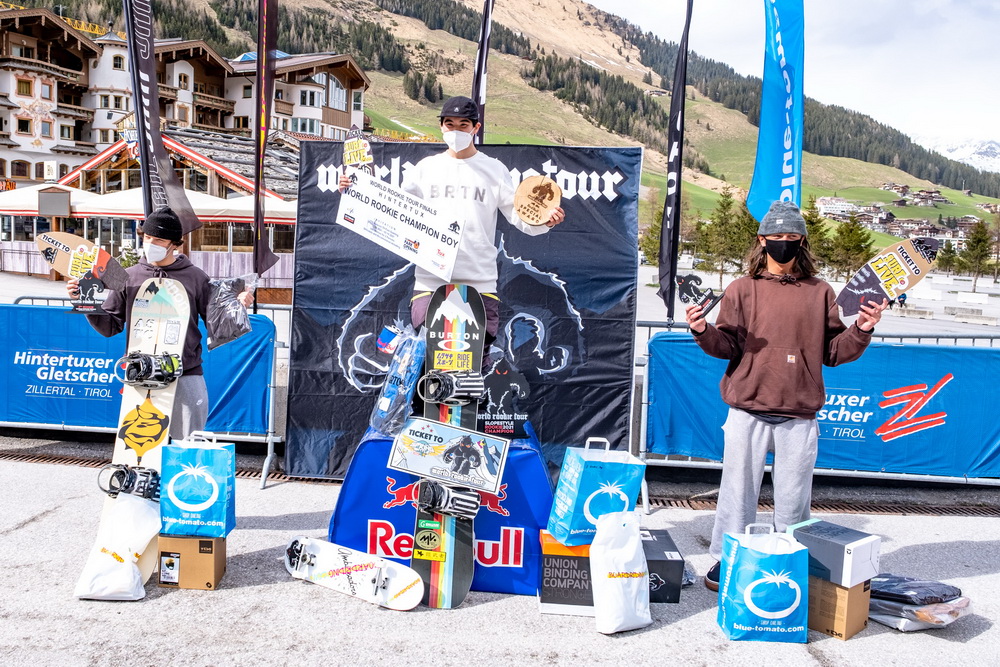 All the other participants, female rookies and male/female groms, unfortunately were not able to compete in the slopestyle due tot he very bad weather condition and, on Sunday, competed fort he WRT Champion titles on the rail line, on a two run – best one count format.

In the Female Rookie category, former 2019 WRT Champion Evy Poppe from Belgium, won again the 2021 World Rookie Champion Title with a solid run consisting of a perfect Noseslide and a 50/50 frontside 360 out. 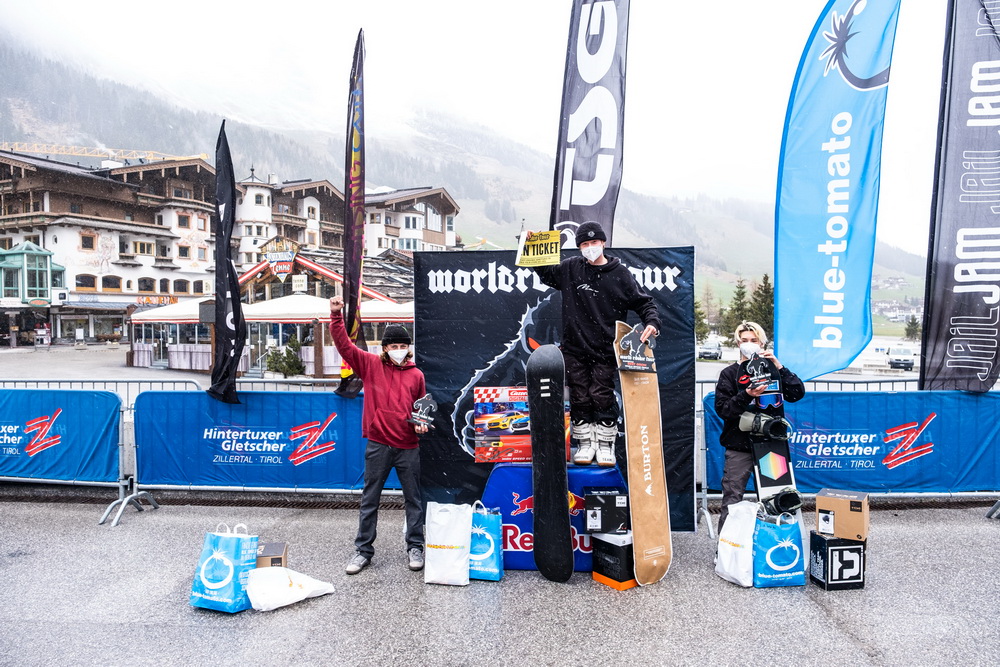 In the grom category, among the male Lenny Fenning from team Whyaintyou GBR won with a Cab 270 on and Cab 180 on BS 360 out. In the female groms Yura Murase from Japan won with a Boardslide to Fake and cab 180 on. They both conquered the World Grom Champion Title. 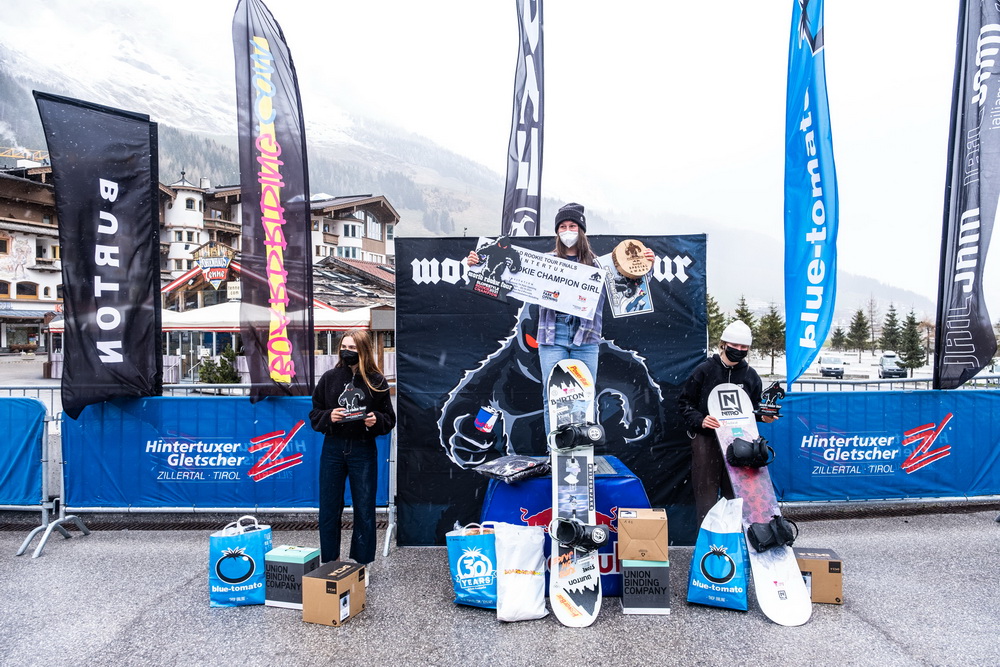 The 2021 Snowboard World Rookie Champions were both awarded with invitations for the 2022 Spring Battle at the Absolut Park and for the 2021.22 Hintertux Opening, and an invitation to a Red Bull Experience to be announced soon. For the male World Rookie Champion only was awarded a spot for 2021.22 FIS World Cup Slopestyle. Other riders on the podium were awarded with surf week with our historic partner SurftoLive.com and with many goodies from all our sponsors.

The event offered a program of side activities  under a strict Covid Security Protocol to create a safety bubble and allow the organization of social moments. During the event took place a workshop about “Wood Photo Printing” by Andreas Monsberger, where they learned how to print a real picture in a piece of wood, making real artworks. The program also included “Avalanche Clinic” with theoretical and practical parts run by MOON Agency and a Karaoke Session.

All the World Rookie Tour organization would like to thank you all for the determination and for the support for our project.  We hope to see you next year in better conditions.

Covid-19: In cooperation with the ÖSV, a comprehensive Covid-19 security concept was implemented to ensure the safety and well-being of everyone involved.

The Boardriding.com crew are in Austria’s Hintertux to stream all the action from both the Snowboard and Freeski Qualifications and Finals! 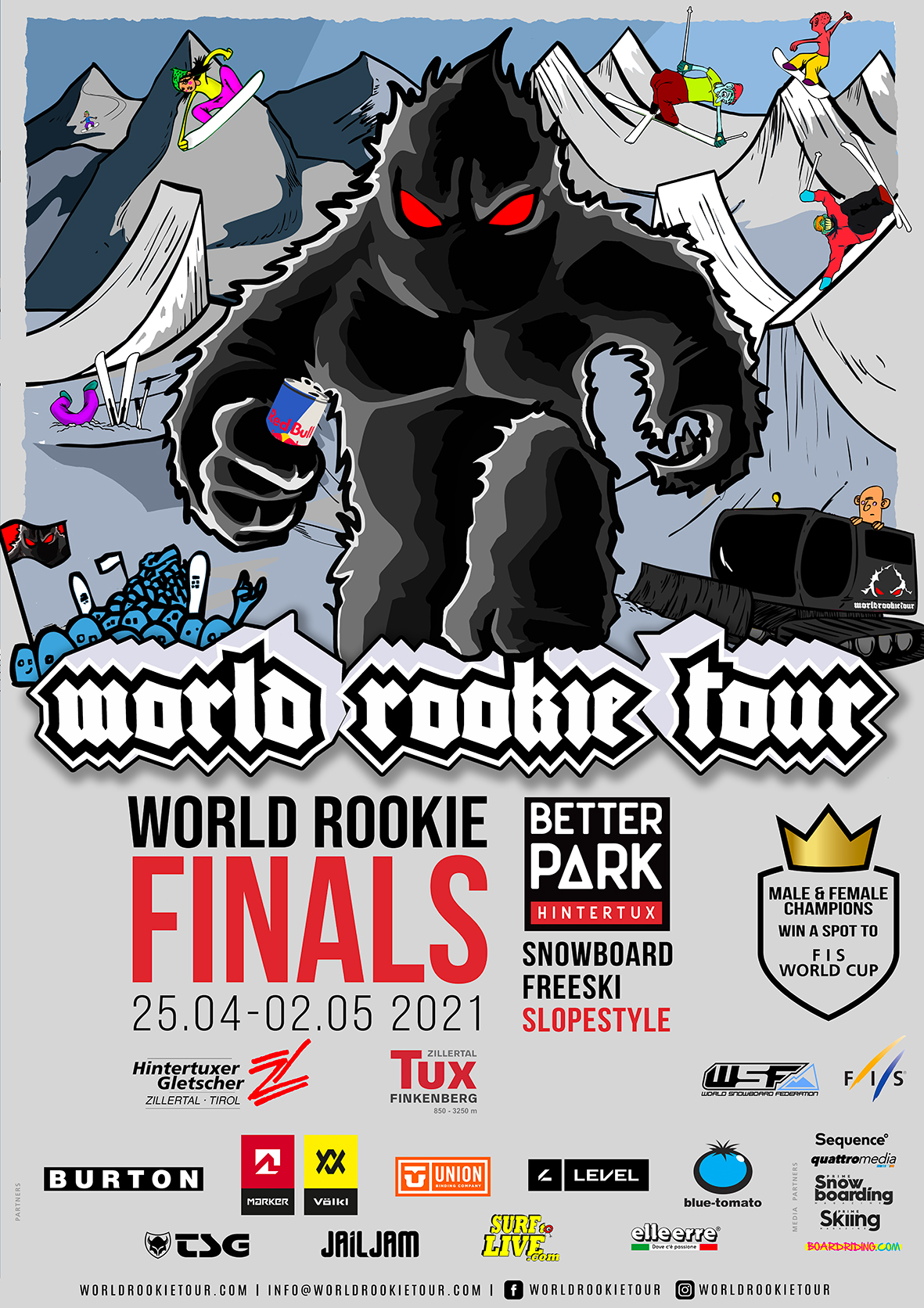 It was a mammoth task for the Black Yeti to organize WRT Finals this season – there was a change of date and even a change of location – but it’s all happening now and excitement levels are through the roof, especially as last year’s Finals couldn’t take place.

As the 2017 & 2019 livestreams for the halfpipe and slopestyle events were so well received, despite all the difficulties on the world stage, there was no question of going and catching all the action again this year. So, for the 3rd time, the Boardriding team are on location at the WRT Finals, bringing not just the Finals, but also the Qualifications into everyone’s homes.

Plus, even though snowboarding is what the BRS team do and love the most, in 2021 the livestream will also include the finals and qualifications of snowboarders best friends: freeski. So get ready to feast your eyes on the world’s best young slopestyle snowboard & freeski riders as we capture all the action!

Have a look at the event schedule below. First up are the Freeski Qualies on Tuesday April 27 at 9.30AM local time (7.30AM UTC). Let’s all keep fingers crossed that the mother nature will be kind so that we can all get stoked during this incredible event. Keep an eye out for updates and tune in to Boardriding’s Facebook page to watch.

Here’s the link to Live stream on Boardriding YouTube!

Hintertux, Austria, from April the 24th to May the 2nd

Betterpark Hintertux is the highest and snowiest freestyle spot of Austria and rated as one of the best snowparks of the alps. As freestyle-enthusiast you can expect perfect jumps! More details about finals format race and set-up, will be released asap.

Registration has to be done online, by following the procedure indicated on the worldrookietour.newcommerce.tirol website. At the same link, book your lift-ticket and the hotel.

Official hotel of the World Rookie Finals is Alpenhof.
NOTE: due to the Covid Protocol it is mandatory for all partecipants to be booked in the Alpenhof Hotel.

Download here all the information about the event included program, prices and covid-19 details.

After Friday, the World Rookie Tour organization will forward to all the subscribers (team or individual) all the updates about the covid-19 protocol and the letter of national interest for the event.

See you on the mountain rookies!