Black Yeti reveals its first World Rookie Tour Skateboarding, which will kick off in Italy from the 18th to the 19th of June 2019, with the first ever WRT skateboard event: the Milano Rookie Fest.

The action will kick off with the world’s best skateboarders throwing down on one of the best Italian summer skateboarding event in Milan, the 2019 Red Bull Skate Week. Black Yeti then will turn to a selection of international events in France, South Tyrol and Swiss to hit the first ever World Rookie Skateboard Finals in Portugal.

“World Rookie Tour is dedicated to providing the young action sport riders with the best possible opportunities to progress their competitive experience and their career. Through the last 14 years Black Yeti discovered the strongest snowboarders in the world, X-Games medalists and many Olympic riders. As well as the best freeskiers during the recent first edition of the World Rookie Freeski Finals in Seiser Alm, Italy. Now the time has come for the World Rookie Tour Skateboard.” Said Marco Sampaoli, co-founder of World Rookie Tour.

! AGE GROUPS !
WRT Skateboard events are reserved to: UNDER 21 SKATERS 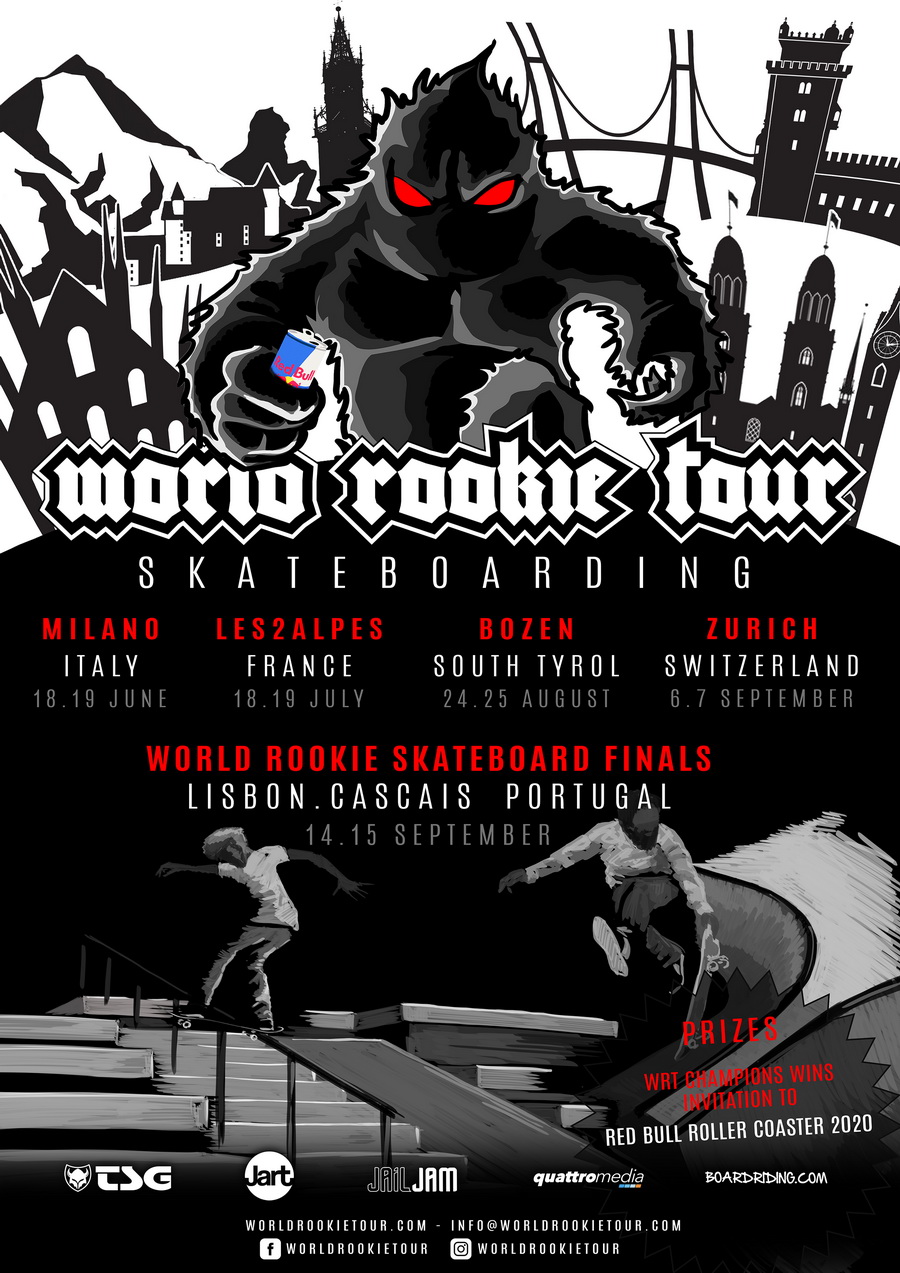 What is World Rookie Tour?
The World Rookie Tour is the most famous, largest and oldest youth international action sport series with more than 2.500 riders: snowboard, freeski and, from summer 2019, skateboard. It consists of a selection of high quality International events, which are not only competitions, but also features loads of other activities to help rookies to grow in the field of professional sport, such as workshops, photo & video shootings, meetings with photographers and international team managers, ticket to the best action sports events, parties and English talks.

2019 World Rookie Tour Skateboarding will provide the perfect opportunity for aspiring riders to break on to the best top skateboarding events in the world. Prizes will support the top skaters carriers: invitations to world class events, to photo shooting and to filming trip.

From grass roots to the elite stages of skateboarding: stay tuned for more info about the tour stops!

ABOUT THE WORLD ROOKIE TOUR
The World Rookie Tour is organized by the Black Yeti ssrl in collaboration with World Snowboard Federation, National Snowboard, Ski and Skateboard Associations and selected action sport agencies. It was born in 2005 as a series of youth snowboard event and it consists now of a selection of high quality International events for snowboard, freeski and skateboard, the so called “Rookie Fests”, reserved for riders under 18’s only, in Europe, North and South America, Oceania and Asia. The World Rookie Tour consists not only of competitions: it also features loads of other activities to help rookies to grow in the field of professional action sports, such as photo & video shootings, avalanche and rescue clinics, meetings with photographers and international team managers, parties and English talks. Since year zero it awards tickets to world class events such as X Games Norway, Audi Nines, The Arctic Challenge, The Air & Style, The World Snowboarding Championships, invitations to professional photo & video shootings, and shooting trip all around the world. Every year the tour crowns the World Rookie Champion at the end of season, at the World Rookie Finals, a unique event where the best youngsters from almost 30 countries compete and have fun. More information at www.worldrookietour.com.

ABOUT BLACK YETI ssd
The Black Yeti is an amateur sport club dedicated to the realization of snowboard, freeski and skateboard projects for boys and girls up to 18 years of age, in Italy and abroad. One of the most successful project is the World Rookie Tour, the biggest and the most famous tour in the action sports world that attracts 2.000 young athletes from 30 nations to the events called “Rookie Fest”, organized all over the world: Italy, Europe, North and South America, Oceania and Asia. The Rookie Fests program includes not only the competition but also many side activities such as avalanche and rescue clinics, workshops and English talks.