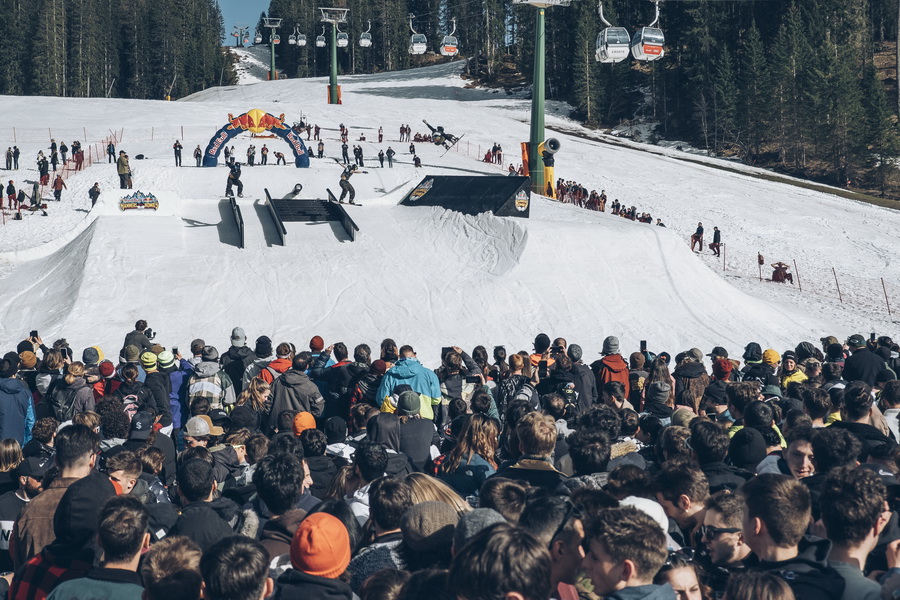 During the Easter weekend, April 16 – 17, the international finals of Red Bull Hammers with Homies contest were held in Madonna di Campiglio, Trentino, Italy. Surrounded by magnificent views, the athletes challenged each other in two team comps during the intense weekend of sport, adrenaline and music: rail contest on Saturday and slopestyle on Sunday.

Why do we tell you all this? As you probably know, last year World Rookie Tour and Red Bull have ratified the partnership for the winter closing event in Italy, the international Red Bull Hammers with Homies, and many rookies from our qualification events had been invited.

From Finland, the “Kona Team” that won the invitation during the last World Rookie Finals in Kaprun, ranked third at the rail jam on Saturday and at the slopestyle on Sunday. “Team Frenchies” from France, invited from World Rookie Fest in Livigno, finished fourth at the rail jam and also at the slopestyle. The Dust team formed also by old acquaintances of the rookie tour as Nick Puenter and Davide Boggio and, as well, new talent such as Alex Lotorto, won the Hammers with Homies rail jam. 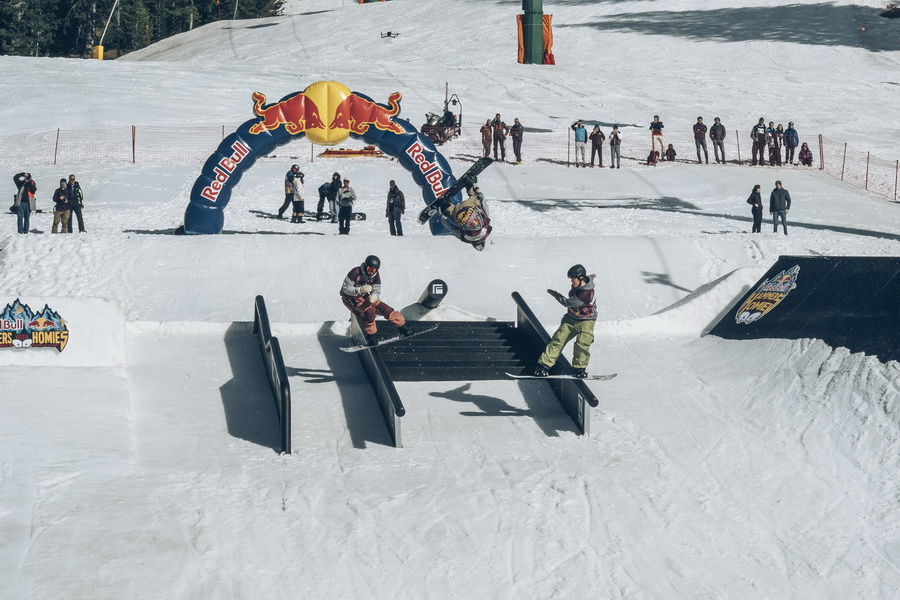 Going into the event detail, the 15 crews from all over the world had the opportunity to unleash their best tricks and showcase their team creativity.

The shapers of the Ursus Snowpark, together with F-Tech Snowpark Design, created a terrifying rail set for the City Rail Contest on Saturday. A crowd of public watched and cheered for the 15 teams made up of 3 riders each, who are challenged by the Knock-Out System to the best of the single dry run. A race full of tension and adrenaline, which attracted everyone’s attention. The Dust team, made up of Alex Lotorto, Davide Boggio and Nick Puenter, won the first place. In second place the Nitro International Sick Dragons Slayerz 43 team with Alexis Roland, Simon Gschainder and Nils Arvidsson. Third place for the Team Kona from Finland: Elias Hamalainen, Mitja Kauranen, Roni Aalto. 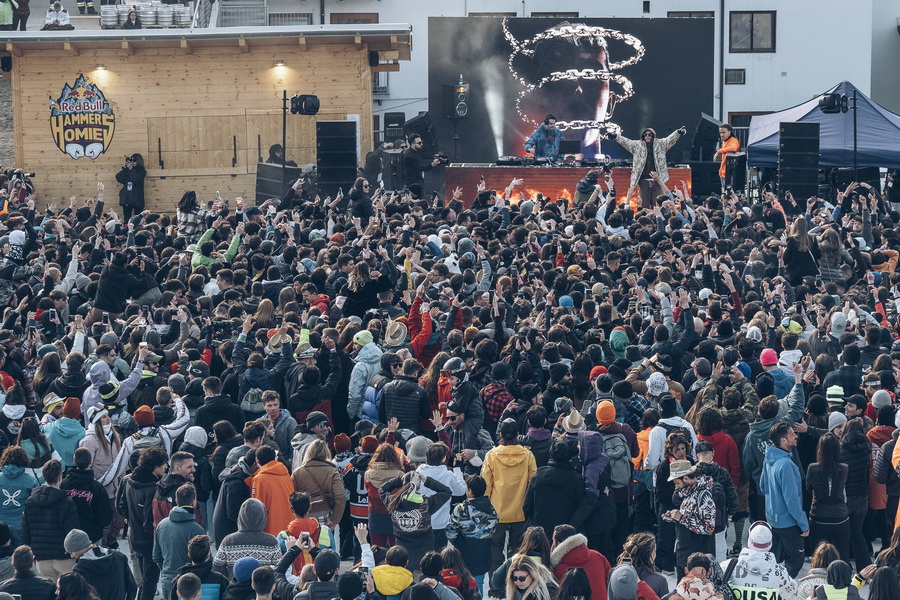 A real party for snowboarders and non-snowboarders who were able to continue to have fun dancing to the notes of the well-known Italian hip hop artist “Salmo”.

On Easter Sunday the competition moved to the top of the mountain at the Ursus Snowpark, where it was the turn of the Team Slopestyle Battle. The format included the execution of two runs each with access to the finals of the best 8 crews. The finalists then challenged each other via the Knock-Out System with a single race. The final saw local heroes “The Ursus Hunters” and the “Sick Dragons Slayerz 43” compete in three runs full of tricks, creativity and teamwork. In second and third place we find the winning crews of the rail contest: Sick Dragons Slayerz 43 in second place and Team Kona in third. The Ursus Hunters team composed by Leo Framarin, Emil Zulian and Nicola Liviero (all former rookies) was crowned the best snowboarder crew of Red Bull Hammers with Homies 2022. 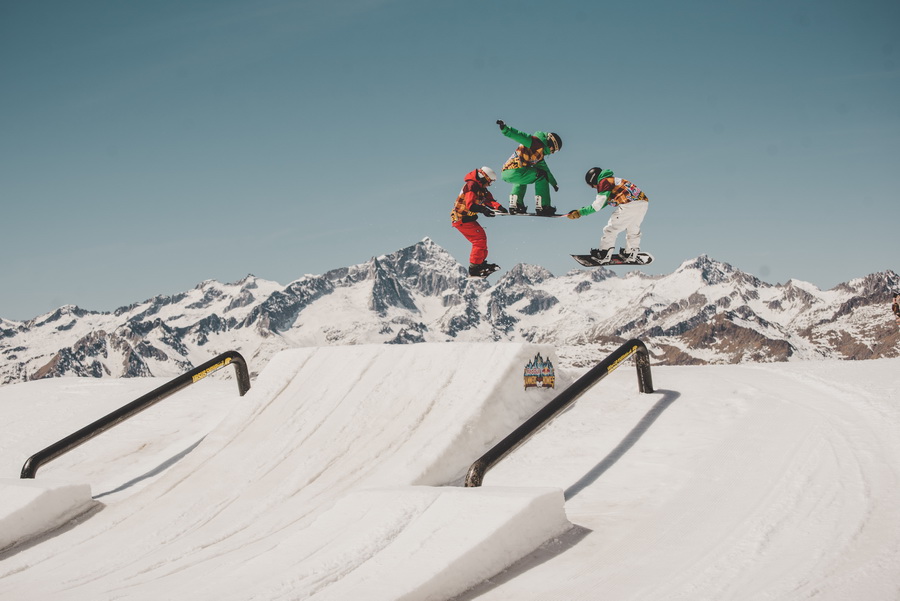 The judges rewarded the team spirit, that is how the riders interacted with each other, highlighting the quality of the individual and the group, creativity in the choice and interpretation of the structures and tricks created and the technical execution of the maneuvres.

Red Bull Hammers With Homies turns out to be not only a competition, but a real snowboard show that has also attracted the attention of everybody on the slopes. 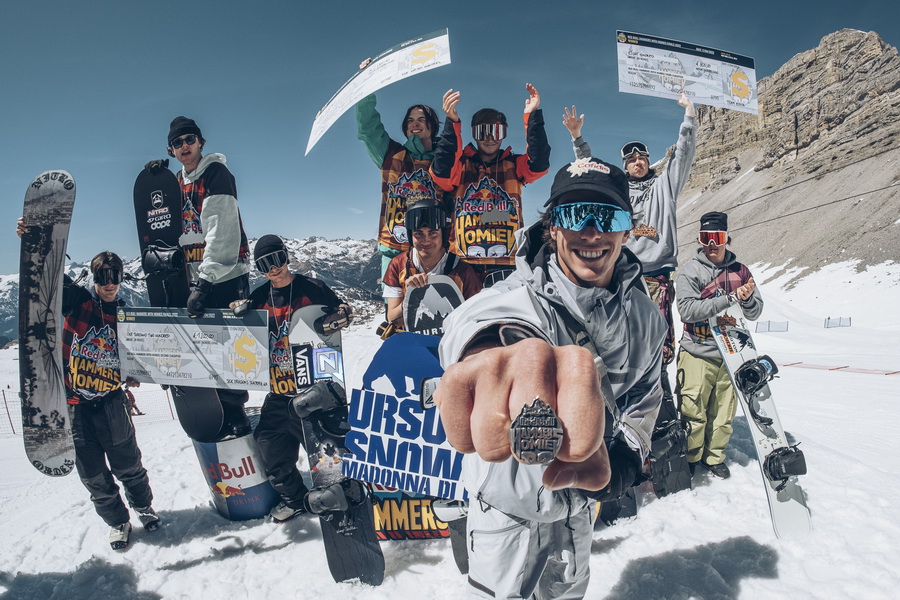 Look at the following LINK the video report of the coolest snowboard weekend of the season and see you next year!

To stay updated on the next edition, follow #RedBullHammersWithHomies