For many years, the Black Yeti, the famous World Rookie Tour mascot, has supported the best snowboarders of the globe: now it is freeskiers’ turn! After having seen the strongest snowboard young guns jumping from the rookie tour to international events organized worldwide, the Black Yeti is excited to discover the future stars of freeski and, therefore, to officially announce the 2019  World Rookie Tour Freeski and the partnership with the prestigious world class event “Audi Nines”. 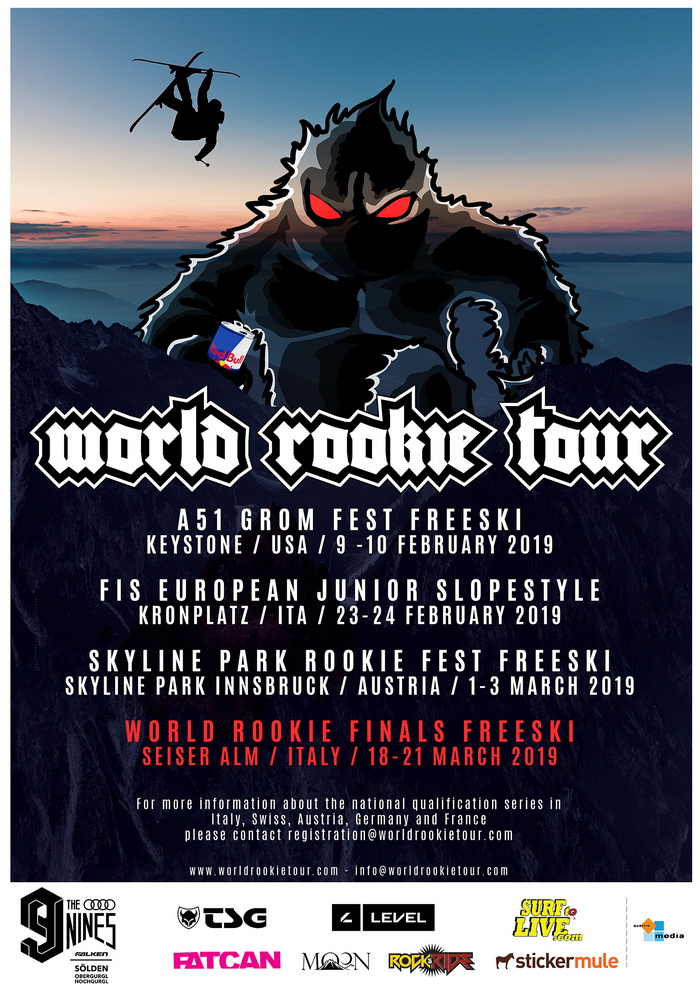 The 2019 World Rookie Tour Freeski will feature qualification events in the United States but also many stops in Europe, already confirmed in Italy and Austria, whereas the stops and qualifying series in France, Switzerland and Germany will be announced soon.

The best athletes of the finals will be awarded with prestigious prices offered by the sponsors and the Champions of the tour will win a surf trip to Santander by SurftoLive.com, invitations to the Rookie Trip in the South Hemisphere and to the World Rookie Tour Shooting. Last but not least the 2019 World Rookie Tour Freeski Champions will be invited to join to the legendary Audi Nines, which will be held in Solden, Obergurgl-Hochgurgl, Austria, from April the 22nd to April the 27th 2019.

“We are more than stoked to offer young riders an opportunity to make their first steps into the professional freeskiing world. With more than a decade of experience in winter sport events we are proud to offer the youngsters a platform to put their names on the map! Take the chance and get involved!!! I’m looking forward to seeing you all on the mountain. “stated Martin Misof, International Freeski Guru and member of the WRF Freeski committee.

World Rookie Tour represents a unique opportunity to start the professional carrier in the action sports field. Many of today snowboard stars started their carrier at the WRT events, and now this opportunity is also given to young freeskiers: winning the World Rookie Finals is the only way for a talented youngster to get a spot in the legendary Audi Nines and receive other incredible prizes.
Are you ready for the challenge?

If you dream is to become a professional freeskier, then your future starts from the World Rookie Tour!

For further information about the tour and the registrations, please write to registration@worldrookietour.com!

Other qualifications events and series in Europe, North and South America, Oceania and Asia to be announced.

If you dream to become a professional freeskier,
then your future starts from the World Rookie Tour!